Buon giorno digital tourists, hope you enjoyed your stay in the Eternal City! Every week we will continue to explore a travel destination in our beloved Italia, providing an immersive experience with our Italian food and activity recommendations. This week we head south to the west coast and small port town of Anzio. Let’s breathe in the fresh sea air and walk along its historical shores.

This little seaside city is known for its fishing port, ferries to the Pontine Islands, and its historical significance from World War II. It has been awarded a ‘beautiful and clean’ award by the Bandiera Blu several times for its pure water in its multitude of different beaches throughout the coast. The prominent historical figure Nero was also born here, so the town has enough to dabble in the interests of history and nature lovers.

This week the Made in Italy chef’s have teamed up to bring to you the Pizza Anzio – a refreshing combination of ingredients to take you to the salty seaside. With a tomato base, cherry tomatoes, olives, parmesan, salt, garlic, chilli, oregano, basil & mozzarella – you’ll be sure to feel like you’re on the Italian coastline. The pizza is only available for this week, so don’t snooze on your beach umbrellas!

To See in Anzio

Take a walk along the magical coastlines, past the bobbing boats in the harbour and the calm Mediterranean waves at the beaches. Going deeper into the city, you’ll see beautiful Liberty-style villas built by the spiritual heirs of the Roman emperors.

The ruins of Nero’s ancient villa sit spread out on the edge of the deep blue Anzio coastline. This archaeological site was actually an imperial villa that served through the time of many emperors in the Roman Empire. The location was quite important as Antium (ancient Anzio) was a famous sanctuary to Fortuna – the personification of luck. The ancient grottini (artifical caves) built for the emperors are still present under the cliffs on the beach.

There are also a few significant war cemeteries from WWII to see, from the battle that ensued after landing of the Allies on the main beach.

To Do in Anzio

Once you’ve explored the town and its mainland gems, try heading out to sea. From the port, you can catch a ferry or hydroplane to the Pontine Islands – Ponza, Palmarola and Ventotene. Ponza has the beautiful coloured-houses charm that Italy is famous for, without the hordes of tourists. The terrain undulates, so many of the houses are located in the hills – a picturesque sight.

Spend some time shopping in the small boutiques on the main street of Ponza, then head down to the beach. Rent a sun umbrella on the sand and enjoy a day at the sand.

Seafood is a big attractor for tourists and experts in Anzio, due to the freshness and the particularities of Roman food serving fish. Crisp, cold wine brought in from the Lazio hinterland is also a famous delicacy of the town, to accompany the salty flavours on your plate.

This week we bring to you the Pizza Anzio – a refreshing combination of ingredients to take you to the salty seaside. With a tomato base, cherry tomatoes, olives, parmesan, salt, garlic, chilli, oregano, basil & mozzarella – you’ll be sure to feel like you’re on the Italian coastline. The pizza is only available for this week, so don’t snooze on your beach umbrellas! Enjoy it whilst watching the 70s Italian flick Armacord – a sweet comedy-drama storyline that features shots taken in the town of Anzio. And of course, don’t forget to pour a fresh glass of white – also available for takeaway from your local Made in Italy for that finishing dolce touch!

Hope you enjoy your staycation in Anzio and we’ll see you next week in Napoli. 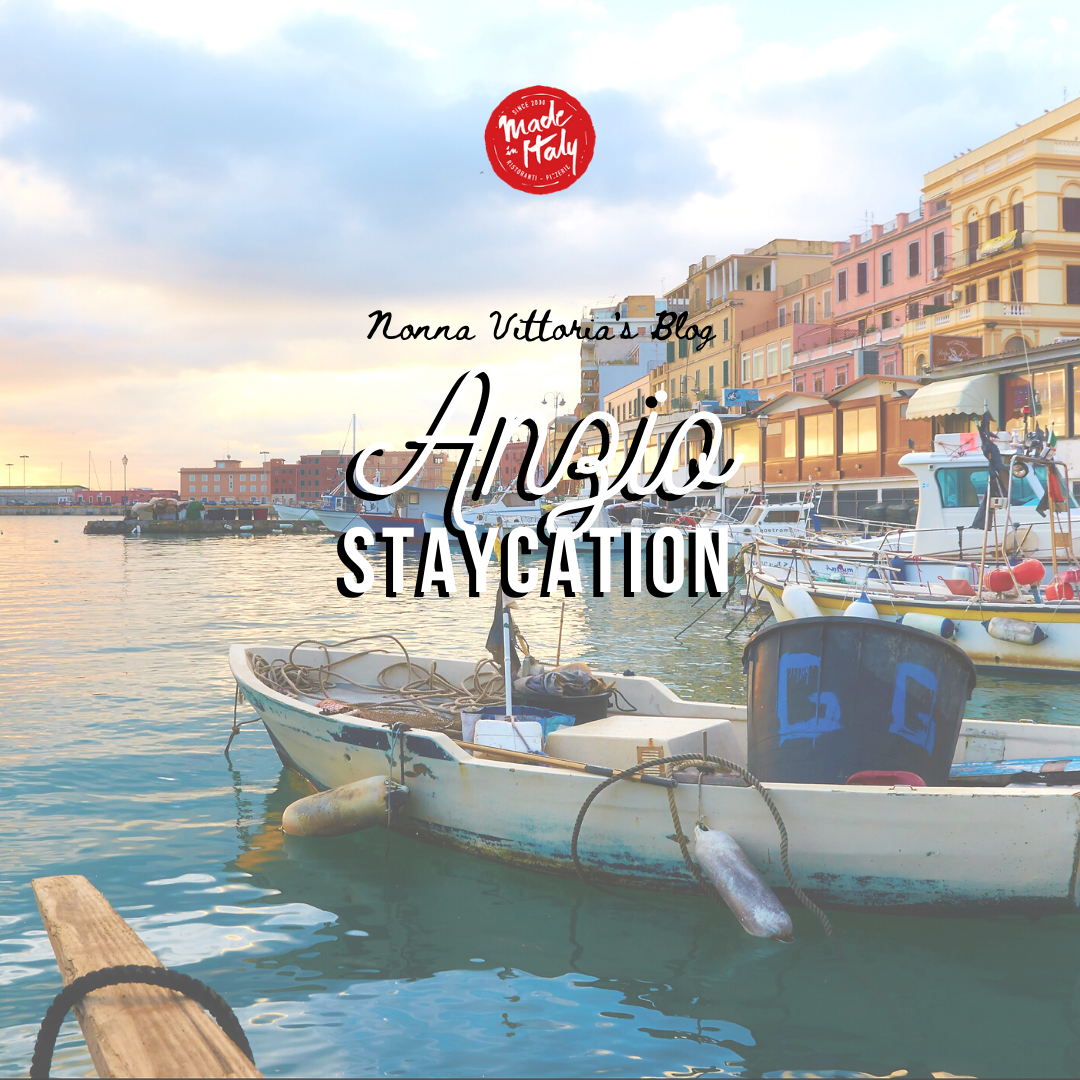