Welcome back web world wanderers! Hope your time in Napoli has been full of pizza and history, because it’s now time to lounge around in surreal beaches and explore an alternative cuisine. In case you’re just joining us this week, we are taking a virtual tour of Italy where we explore new destinations each week. We suggest the top ways to experience this Italian location back home, and have even created special pizzas for each place! Immerse yourself in a staycation… here we go on a ferry trip from Napoli to Sardegna!

More commonly known as Sardinia, this island is considered a gem of the Mediterranean. It has its own ancient culture different to Italy, so you can expect the food and the lifestyle to surprise you! This island is the second largest in the Mediterranean, and is renowned for its pristine beaches and picturesque rocky coastlines. Through the study of ancient texts and work done by scientists, it is currently believed that Sardegna might be the lost city of Atlantis! Doesn’t that just make you want to dive into its crystalline waters and look for treasure? Let’s go!

To enjoy the flavours of Sardegna during your staycation adventure, the Made in Italy chefs have teamed up to bring you Pizza Sardegna, inspired by the crystal clear waters of the Mediterranean featuring; a Tomato Base, Fresh Prawns, Cherry Tomatoes,Oregano, Parmesan, Chili Flakes, Garlic and Mozzarella.

To See in Sardegna

Aside from its pristine beaches and lush mountains, Sardegna has many interesting sights. Like many other Italian destinations, Sardegna hosts an array of ruined Roman cities such as the three thousand year old city of Nora, with a visitable Roman-era theatre and a few ancient temples.

Visit the albino donkeys of the Isola dell’Asinara. Does this sound like a dream? Well it’s your lucky day. On the coast off mainland Sardegna, there is a remote island that – according to the Italian census – has only one resident. The majority of the population is in fact, one hundred miniature albino donkeys. Asinara now holds a natural park status, meaning a safe refuge for its donkeys and a pristine environment to watch them in.

To Do in Sardegna

Explore Sardegna’s grottoes. Take a short boat trip from Alghero to witness Neptune’s Grotto and its magnificent stalactites and stalagmites. The interior lake allows you to immerse yourself inside the surreal scenes. There is also the ten kilometre long Grotta di Ispinigoli near Doralgi. Here the stalactites hang up to 38 metres! Guided tours for this grotto are also available.

Fancy a hike into one of Europe’s deepest canyons? Sardinia has the Gola su Gorropu gorge. It holds 400m leaning limestone walls that dive into the Sardinian mountain-scape. The river to blame for these formations now runs underground unless there is heavy rainfall. To experience this from the ravine, there are a number of trails with varying difficulty levels that descend down. The colours of the stone hold shades of blue and orange. It’s an adventure worth undertaking!

Sardegna has a distinct take on pasta, bread and dolci, and they have their own particular wines and cheeses. This is all due to their mixing pot of dominant cultures through the ages. In its mystical hinterlands, the Sards raise plenty of cattle and livestock – and this features greatly in their cuisine. They try to utilise as much of the animals as they can, with some restaurants serving tongue, brain and entrails!

Order in our weekly creation Pizza Sardegna and watch the classic 1977 James Bond 007 film The Spy Who Loved Me, which set in this mystical island and surrounding waters. Additionally, as travel restrictions ease up from the 1st of June, travel to the Jenolan caves to immerse yourself in our local Australian stalactites while we wait for international travel to re-open!

Enjoy your staycation in Sardegna and its culinary delights. See you next week for an adventure along the Amalfi Coast! 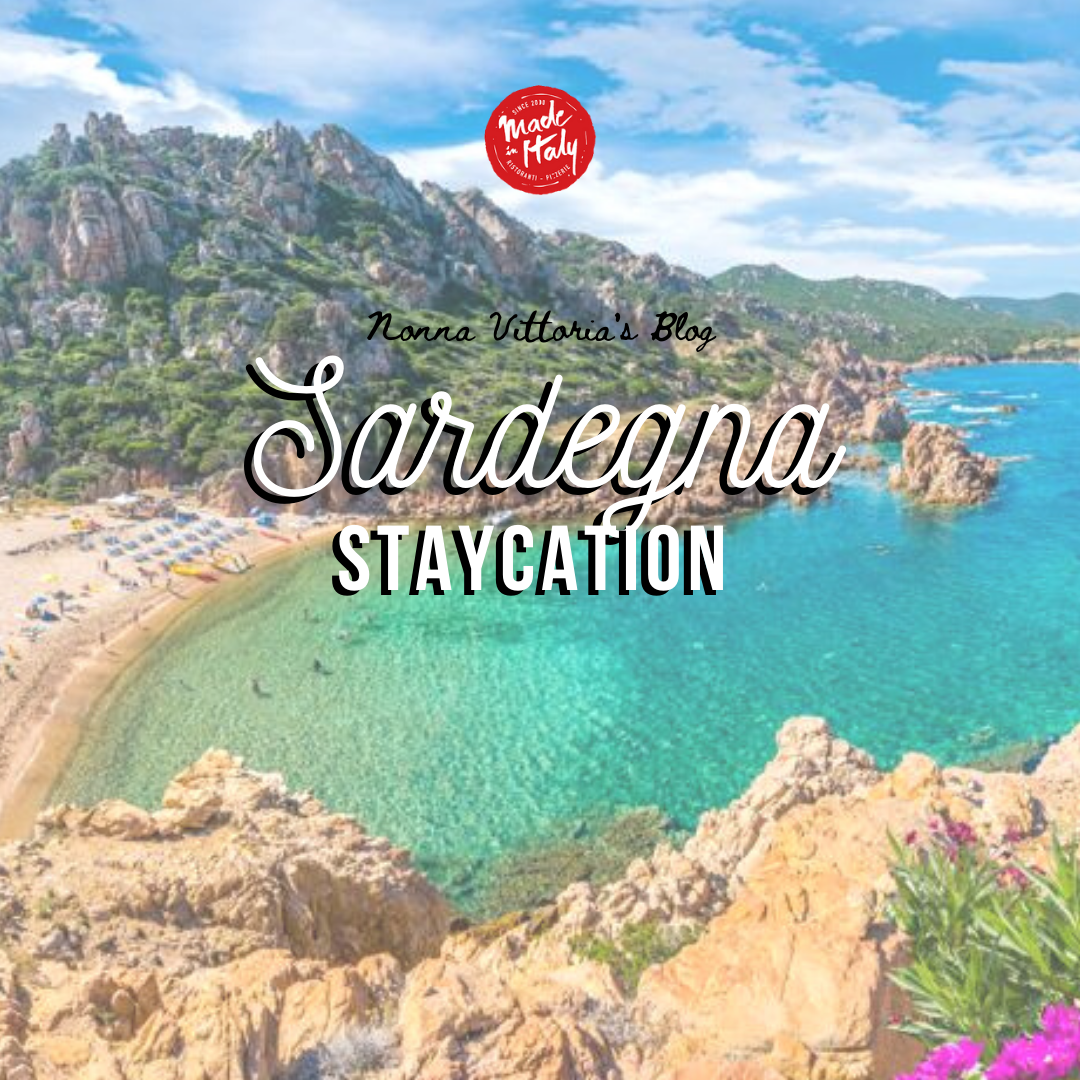