Buon giorno, online explorers! We had a magical stint in the floating city, and now it’s time to catch a train into the hustle and bustle of the Italian design capital – Milano. If you haven’t joined us yet on our staycation adventure, we’ve been traveling through Italy discovering travel destinations and capturing their essence to make it a holiday at home. This is our eleventh week staycationing, so let’s put our smartest clothes on and catwalk through the streets of Milano.

Does Milano feel familiar? This city used to be a city of water, much like Venezia. A long time ago, the channels of Milan connected the lakes of Maggiore Como, and the Ticino river with other waterways and the sea. This special city is also provides plenty of art and culture, being a long-term home to artists like Michelangelo & generating the aperitivo customs. Let’s grab a drink, snack for free & discuss our sightseeing plans!

To See in Milano

The Duomo & and the accompanying piazza are the embodiment of the city. This picturesque Gothic architectural landmark is located in the centre of Milano, and from the top you get a view of the whole city. Its building started in the late 14th century, and even today you can see scaffolding for restoration.

To indulge in the quintessential Italian city atmosphere, head to the Brera neighbourhood. It’s a romantic area with cobblestone streets, sprinkled with independent cafes and boutiques perfect to find unique snacks and gifts.

To Do in Milano

Once you’re in the neighbourhood, head to Pinacoteca di Brera. This fine arts gallery houses one of the most important art collections in Italy. Located in the Palazzo Brera, the centre used to be a monastery where the monks created a cultural centre. Amongst the famous masterpieces found there you can see Raphael’s ”The Marriage of the Virgin” or Caravaggio’s ”Last Supper to Emmaus”.

For a nighttime activity, find your way to the Scala Opera House in the Piazza della Scala. It is one of Italy’s 3 most prestigious operas, where Italian masterpieces such “Norma” by Vincenzo Bellini or “Otello” by Verdi were created. On the left of the building you can visit the Museum of La Scala and its collection of musical instruments, opera costumes and historical documents.

Italy is the largest producer of rice in Europe, so it’s no surprise that  most traditional Milanese dishes are risotto. Risotto alla Milanese is a favourite amongst these, using saffron to bring a pop of yellow colour to the dish, whereas the cheese and bone marrow are responsible for the flavour and creaminess. For the meat lovers, osobuccois the way to go. The name translates to “bone with a hole”; this veal meat is braised with vegetables, wine and broth until it’s tender to the point where it melts in your mouth.

Treat yourself to this week’s location special, the Pizza Milano. It has a tomato base, onion, olives,  sliced tomato, artichoke, spinach, salt, parmesan, garlic and mozzarella. As you munch, make sure to watch some on-theme television. Experience a new genre with the Neorealist film Miracolo in Milano (1951). The heartwarming film is a fantastical fable featuring white doves, magic powers and broomsticks. It’s an award winning film that, including the Cannes Film Festival Grand Prize. For those passionate about history, it’s worth taking a look at the BBC documentary Ben Building: Mussolini, Monuments and Modernism (2016). It features Milano, amongst other Italian cities, whilst exploring the architecture of 20th-century Europe’s Fascist regimes.

Enjoy you staycation and the sites, sounds and flavours of Milano and we look forward to taking you on another adventure next week in Cinque Terre! 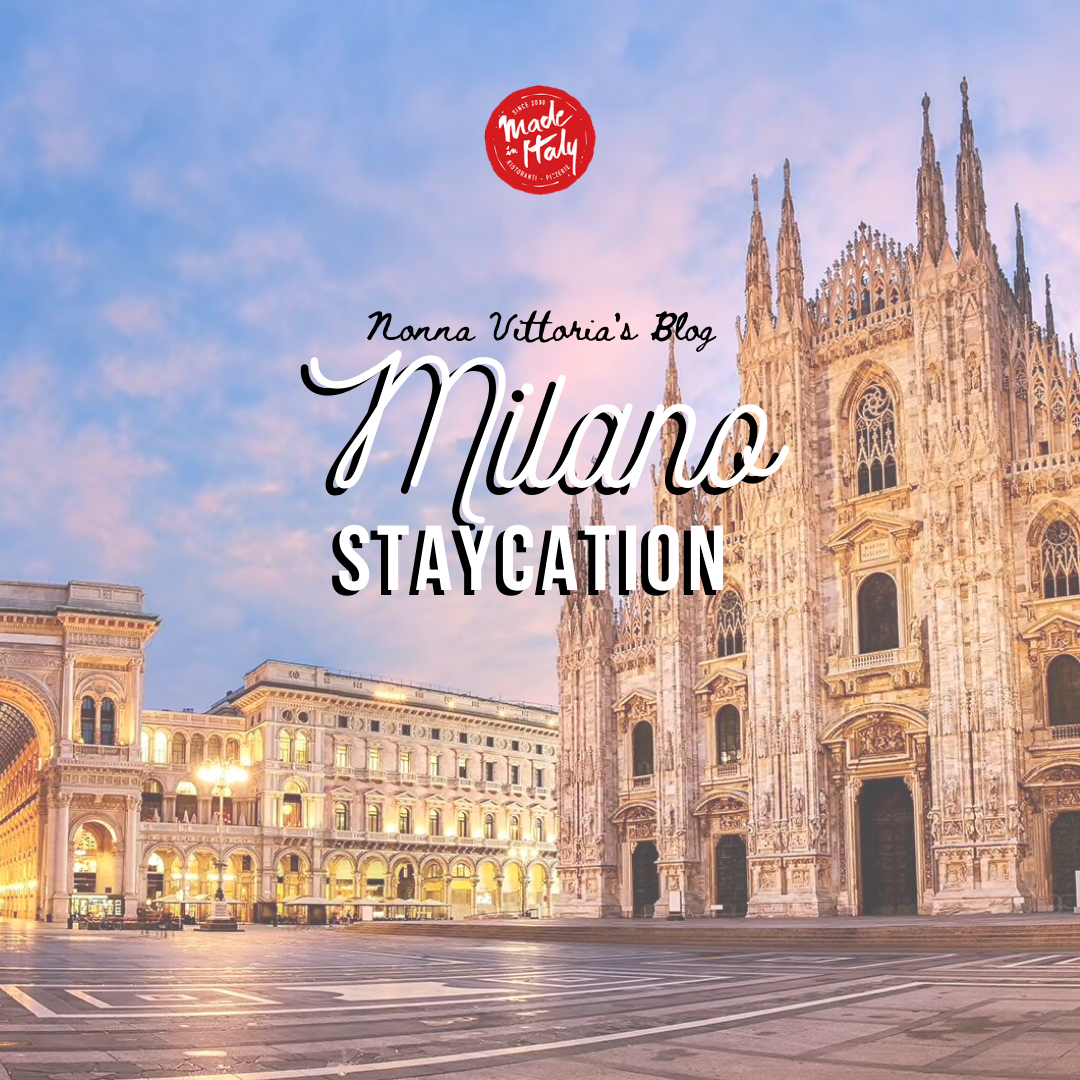